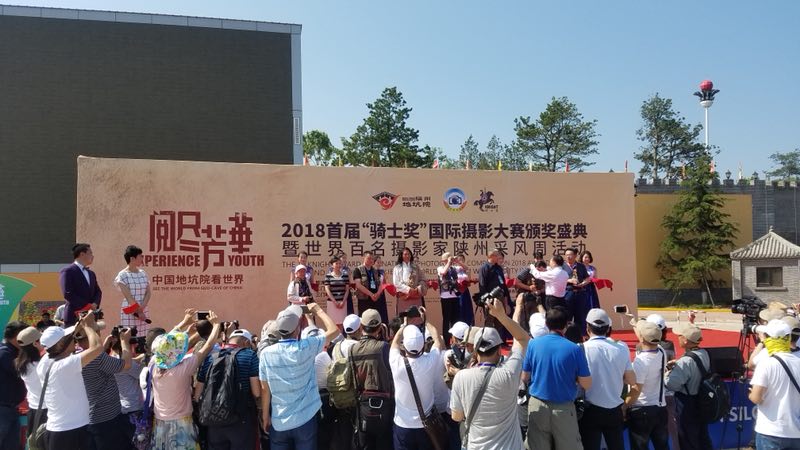 On the morning of May 16th, “Reading the Chinese to See the World”, the 20th edition of the “Cleveland Award” International Photo Contest Awards Ceremony was held in the Dangkang Yard in Shanzhou.

Xia Qingcheng, former deputy director of the Standing Committee of the Henan Provincial People’s Congress, Bai Jianguo, former deputy secretary-general of the Provincial Party Committee, director of the General Office, Jia Xianbin, deputy researcher of the Department of Foreign Affairs Management and Information of the Provincial Foreign Affairs Office, Liu Nanchang, secretary of the Sanmenxia Municipal Party Committee, deputy secretary of the Shaanxi Provincial Party Committee, The four chiefs of the district chief Hu Zhiquan attended the event.
Chairman of European Photographic Society Deng Shangxi, European Photography Society, British photographer Mark, Secretary-General of the Kaohsiung City Amateur Photographers Association Long Yumin, and Singaporean photographer Wu Weicheng attended the event.
Before the event, performances such as the “Ten Bowl Seats” and the dance “The Grass Print” performed by the Shaanxi Drum Coil Book were performed.
Xia Qingcheng, the former deputy director of the Standing Committee of the Provincial People’s Congress, announced that “Reading the Chinese World Excavation Hall in Fanghua to see the world” will open the first “Cleveland Award” international photography competition exhibition in 2018 and the world’s 100 photographers in the Shanzhou Collection Week.
The awarding ceremony of this photo contest was held in the district of Shanzhou. It shows that today’s Shanzhou is a modern city with a long history, rich culture, beautiful scenery, superior location and ample vitality. In the process of accelerating modernization and building a Chinese dream, the world needs to understand that Shaanxi and Shaanxi provinces are determined to go to the world. This is a major strategy for the implementation of the Party Central Committee and General Secretary Xi’s opening to the outside world in Shaanxi, implementing the work plan for the “Government of the Henan story based on the culture of the Central Plains” by the provincial party committee and the provincial government, and putting the ecological end of the proposal made by the party secretary Liu Nanchang. The specific instructions for the creation of charm, Sanmenxia with culture as the soul, have become concrete actions. Through a series of activities to improve taste, quality, and brand building, the competition has truly become an open platform for Sanmenxia’s Shanzhou District, becoming a reference for Chinese and foreign photographers. The event of communication has become a cultural feast of thought collision and artistic communication.
The competition was launched from January 1 to April 1. The organizing committee received a total of 18,562 works submitted by photographers from 19 countries and regions. After careful selection by Chinese and foreign photographers, 240 works were awarded. There are six categories of characters, scenery, animals, documentary, folklore, creativity, gold, silver, bronze, and outstanding awards. Another 150 works won the finalists award. These works are widely used and rich in content, and they show the beautiful natural landscapes of various countries from different angles. Cultural attractions.
At the meeting, Hu Zhiquan, deputy secretary of the District Party Committee of Shaanxi, gave a welcome speech; Deng Shangxi, chairman of the European Photographic Society, introduced the preparations for the contest. The conference announced the winners of the “Cultural Exchange Contribution Award” for the 2018 Cleveland International Photo Contest and the winners of the 2018 Cleveland International Photo Contest.
Finally, Wu Weicheng, president of Singapore Colour Photography Society, the winner of the competition, gave a speech; the leaders of the exhibition organized the unveiling of the creation base of the Shadouk Institute of the European Photographic Society; media reporters, photographers, and on-site staff visited the award-winning exhibition.
The event was organized by the European Photographic Society, the Federation of Literary and Art Circles of the Shaanxi District of Sanmenxia City, and the Management Office of the Shankeng Geopark Scenic Area; the Sanmenxia Shanzhou Geotechnical Culture Co., Ltd. and the Sanxiaxia Office of the Overseas Chinese Affairs Office of the Shaanxi District Government. The Association of Central and Eastern European Cultural and Economic Exchanges, the Eastern House of Serbia, and the Photographers Association of Shanzhou District of Sanmenxia City co-organized.